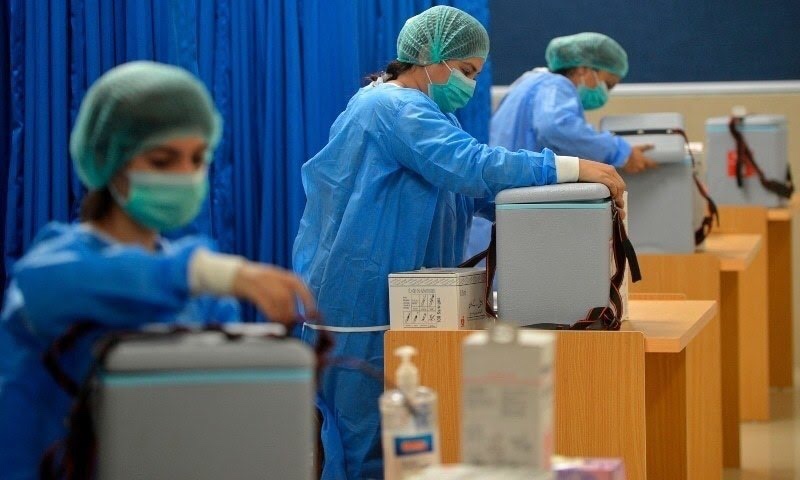 ISLAMABAD: Pakistan will acquire one million doses of Covid-19 vaccines from two companies of China by the end of this month, said a senior government official on Friday.

Federal Minister for Planning and Development Asad Umar said that the government had finalised arrangements to import one million doses of coronavirus vaccines which would reach Pakistan in two consignments carrying half a million each.

“First consignment would reach by March 25 and the second one on 30th. The government would acquire more [Covid-19 vaccines] next month. We are bringing these vaccines from two different companies of China,” the channel quoted him as saying.

The federal minister, who is also chairman of the National Command and Operation Centre (NCOC) for Covid-19, however, warned that the infection rate was rising and people must adopt the standard operating procedures (SOPs) in letter and spirit. If SOPs’ compliance didn’t improve, the government would be forced to place stronger restrictions, he added.

“The NCOC meeting is scheduled to be held on Monday [March 22] at which we would review the situation and if it doesn’t improve a decision of stricter measures can be announced,” said the minister.

The national positivity ratio climbed to eight per cent on Friday as the country continued to reel from the rising number of Covid-19 cases.

Over 3,400 people contracted the virus for the second straight day with 40 patients losing their lives. Following the latest casualties, the overall death toll from the virus has reached 13,757.

According to the NCOC, 3,449 people were found having the infection out of 42,845 tested across the country on Friday.

A day earlier, 3,495 cases — the current year’s highest number of cases in a single day — and 61 deaths were recorded.

According to the NCOC officials, Punjab reported 1,868 cases and 23 deaths during the last 24 hours, while in Islamabad, 620 people got infected and five lost their lives.

Punjab’s tally of positive cases has risen to 193,054 and the number of deaths to 5,919. The province has been reporting more than 1,000 infections during the past 10 days.

Out of the total 40 deaths that occurred during the last 24 hours, 17 of the deceased were on ventilators.

According to the data, out of the total ventilators allocated for Covid-19 patients, the maximum were in use in Islamabad, which had a 51pc occupancy rate, followed by Multan with 41pc; Lahore, 39pc and Peshawar, 26pc.

The maximum number of oxygenated beds was in use in Gujrat which was calculated at 75pc, Peshawar had a 53pc occupancy rate; Islamabad, 40pc and Rawalpindi, 32pc.

Around 276 ventilators were occupied elsewhere in the country while no Covid-19-affected person required vent in Azad Jammu and Kashmir, Gilgit-Baltistan and Balochistan.

According to the government’s portal for tracking the spread of the virus in the country, 813 patients recovered from coronavirus in the last 24 hours.

So far 578,314 people have survived the deadly virus with the recovery rate calculated at 93.4pc.

According to the NCOC officials, there are 27,188 active cases in the country at present.

Meanwhile, Islamabad saw 747 new coronavirus cases, which was the highest number of daily infections ever recorded in the city this year.

“Stay safe ever and follow the sops plz,” he tweeted.

The NCOC had expressed concern over the continued violations of health guidelines and warned of closing businesses and imposing restrictions on economic and social activities if the trend continued.

On Feb 24, the centre had decided to ease many restrictions and open educational institutions with full strength from March 1 after a fall in the number of positive cases was seen.

However, it had to re-impose restrictions on March 10 after cases started increasing rapidly.

The centre announced a two-week spring vacation in educational institutions in 10 cities, whereas Balochistan and Sindh were suggested to limit attendance to 50pc. It decided to continue ‘smart lockdowns’ and ‘micro-smart’ lockdowns and re-enforce 50pc work-from-home policy and time limit of 10pm on all commercial activities with immediate effect. It was decided to close amusement parks at 6pm.

In view of the high mortality rate among senior citizens, the NCOC had allowed people aged 70 years and above, who have registered themselves on the helpline 1166, to walk into any vaccination centre to get inoculated against Covid-19.

On March 17, China gifted another 500,000 doses of its state-owned Sinopharm vaccine to Pakistan while the first consignment of the privately-imported Russian vaccine also reached Karachi on the same day.

A local pharmaceutical company, which was allowed its import, said it would distribute 50,000 doses of the Russia-developed Sputnik V to large hospitals and institutions for administration to people who could afford the jab.