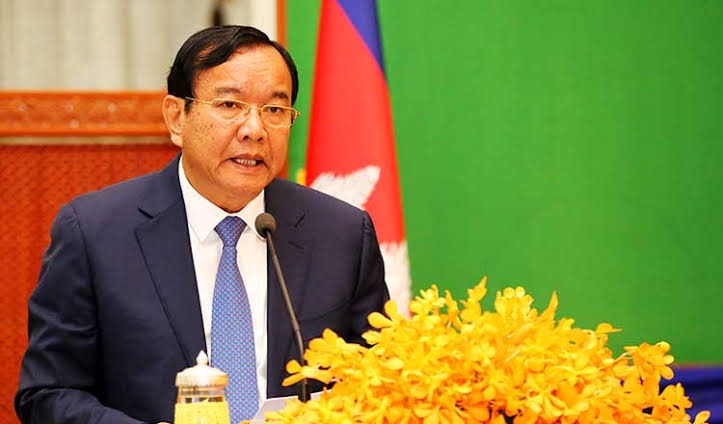 PHNOM PENH: Cambodian Deputy Prime Minister and Foreign Minister Prak Sokhonn has praised China for helping the 10-country Association of Southeast Asian Nations (ASEAN) and the world to fight against the COVID-19, said a foreign ministry’s statement released on Wednesday.

“His Excellency Deputy Prime Minister expressed appreciation for China’s goodwill in supporting the fight against the COVID-19 pandemic worldwide and in ASEAN region through the provision of vaccines and medical supplies,” the statement said, citing his remarks delivered at the Special China-ASEAN Foreign Ministers’ Meeting.

He underlined the importance of ensuring uninterrupted flow of trade, investment and greater market access facilitation, the statement said, adding that on regional integration, he called for greater efforts to enhance connectivity and stressed the necessity to translate the ASEAN-China joint statement on synergizing the Master Plan on ASEAN Connectivity 2025 and the Belt and Road Initiative into concrete action.

According to the statement, Sokhonn also highlighted the tremendous achievements that could be achieved under the ASEAN-China Strategic Partnership in a wide range of areas, from political-security cooperation to trade and investment and people-to-people exchanges.

“In recognizing the growing significance of ASEAN-China dialogue relations over the last 30 years, he reaffirmed Cambodia’s full support for the elevation of ASEAN-China relations to Comprehensive Strategic Partnership,” it said.

“The LMC must continue to show solidarity in addressing this global health crisis and attach high priority to ensure adequate access to vaccines and medications as global public goods,” the statement said.

Sokhonn also underscored the dynamism and potential of the LMC to foster structural transformation in building resilience to promote quality of growth, as well as enhancing regional economic cooperation among and within the ASEAN member states, it added. Enditem