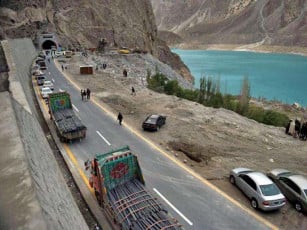 China Road and Bridge Corporation (CRBC) is investing more than US $ 3 billion to develop the coastal areas under the China-Pakistan Economic Corridor (CPEC).

Special Assistant to Prime Minister (SAPM) Imran Khan on CPEC affairs Khalid Mansoor made this announcement here on Thursday in a media interaction.

“The Karachi Port Trust (KPT) and CRBC have already signed an agreement worth more than US $ 3 billion under the CPEC project,” he informed.

He maintained that the government was working for the development of coastal areas of Karachi under the CPEC project.

Mansoor said that commercial and housing projects will occur in the adjacent Machar Colony of KPT.

Late last year, the Pakistani federal government had unveiled an ambitious plan to rebuild Karachi’s coastline under CPEC with more than $ 3 billion “direct Chinese investment” that aims to overhaul city’s seaboard with new berths for the port, a new fishery port and a ‘majestic harbour bridge’ connecting it with Manora islands and Sandspit beach.

The Karachi Coastal Comprehensive Development Zone (KCCDZ) — spread over 640 hectares or 1,581 acres on the western backwaters marsh land of the KPT leading to revamp one of the oldest city slums Machhar Colony relocating its more than half a million population — is an initiative of the Ministry of Maritime Affairs.

KCCDZ is the latest addition to CPEC projects aimed at providing Karachi with an ultra-modern urban infrastructure zone, placing it among the top port cities of the world.

Mansoor reminded that the country after the year 2008, witnessed a shortage of energy with a daily 12 to 18 hours of supply cut off, saying that Pakistan needed to transfer its power generation from furnace oil to coal.