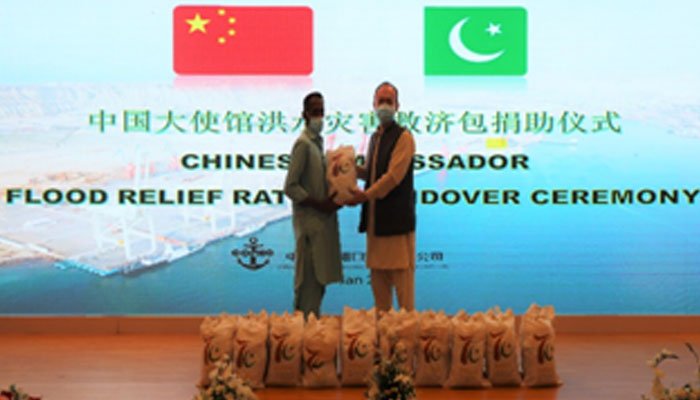 According to a statement, the embassy of the People’s Republic of China has distributed relief goods with the collaboration of Chinese enterprises among the local families of flood-hit Gwadar in order to get their lives back to normalcy. The supporting team consists of local employees of China Overseas Ports Holding Company who have been instrumental in outreaching far-flung areas of Baluchistan. Furthermore, the Chinese embassy vows to continue a series of aid activities on a humanitarian basis to the iron brothers. In addition, the Chinese government has already taken several steps for infrastructure expansion, medical and educational support, and socio-economic development in Pakistan.

In a bid to diminish the sufferings and hardships being faced by the people in flood-hit Gwadar, the Chinese embassy, together with Chinese enterprises, distributed relief goods among local families.

Low lying areas of Balochistan, including Gwadar, had become flooded as heavy rainfall continued to pour in different areas of the province few days back. Many houses were collapsed, lives of local populace threatened and property severely damaged. Meanwhile, the Baluchistan government had declared Gwadar a ‘calamity-hit district’.

Taking prompt action of the emergency situation, the Chinese embassy, together with the Chinese enterprises distributed edible items among the local families in order to get their lives back to normalcy, said a statement issued by the embassy.

China Overseas Ports Holding Company organized a supporting team which consists of local employees. Amid the torrential rain, the support team continued their efforts by outreaching far-flung areas of the districts which have traditionally remained deprived and untouched, read the statement.

It said that such endeavors on the part of Chinese and the corresponding response from the Pakistani side, showed the deep-rooted strength of China-Pakistan ties.

This is the first round of aid in this series. However, in terms of humanitarian assistance, government of China has undertaken several steps in infrastructure reconstruction, medical and educational support and socio-economic development, said the Chinese embassy.