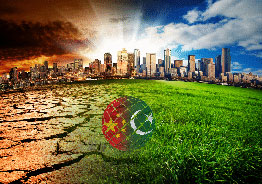 Ours is the age of “green” and China Pakistan Economic Corridor (CPEC) is the guarantor of “green energy” and holistic development in the country.

Green energy is anti-global warming which can be diminished under CPEC as it is continuously showing positive results through various initiatives taken in recent years.

In this context, the ongoing 26th Conference of Parties (COP26) of the United Nations Framework Convention on Climate Change (UNFCCC) has set four main targets. Thus it has reaffirmed the importance of green economic corridors like CPEC.

The COP26 consists of securing global net-zero carbon emissions by 2050 and keeping the 1.5 degrees Celsius rise.

It adapts framework mechanisms to protect communities and natural habitats by protecting and restoring ecosystems and to build defences, warning systems and resilient infrastructure and agriculture to avoid loss of homes, lives and livelihoods.

It pushes the developed countries to make good on their promise to mobilize at least $100bn in climate finance per year by 2020. It paves the path for partnerships to rise for the challenges of the climate crisis by working together.

While addressing the COP26 Climate Change conference, the Chinese President, Xi Jinping, has called on developed countries to support developing countries to do better in dealing with the climate crisis.

The Chinese President also urged all stakeholders to take stronger actions to jointly tackle the climate challenge and pledged that his country would speed up the green and low-carbon energy transition, vigorously develop renewable energy and plan and build large wind and photovoltaic power stations.

On the other hand, Prime Minister Imran Khan announced at the Climate Ambition Summit 2020 that 60 percent of all electricity produced in the country will be derived from clean sources by 2030. Thus CPEC has great importance.

Pakistan has outperformed many regional countries in its strive towards climate change in the last three years. It has launched three country strategies by the mid of October 2021.

Moreover, a national framework for policy advocacy, communication and outreach is in the process. The Generating Global Environmental Benefits (GEB), the GEF and UNDP also supported the project of the Ministry of Climate Change.

Since its beginning, CPEC has been supporting Pakistan to tackle its energy deficits and provide basic infrastructure for development.

As propagated by the Western media most of its energy projects are eco-friendly and do not pose much harm to the atmosphere during the construction and operational phase. All the Chinese companies have been using smart ways to control emissions and waste.

In this regard, Sahiwal Power Plant is one of the prime examples of eco-friendly power generation unit with its capacity to generate 1,320 MW electricity. It used supercritical technology for electricity generation in the country.

The latest technology and use of bituminous coal, having low mercury and sulfur content and high calorific value, enabled the power plant to control its emission well below the world and the Pakistani standards. Moreover, it has planted over 80,000 trees in the compound.

Apart from using the latest technology in coal-fired power plants in Punjab and Balochistan provinces, the Chinese companies are providing renewable energies including solar and hydel to meet the country’s demand.

It hopes that CPEC will play an important role to achieve the target of 60 percent renewables energy in the national grid up till 2030 due to its fair contribution in renewable energy projects including hydro, wind and solar power.

Pakistan Prime Minister believes that the commitment of Chinese and Pakistani leadership to make CPEC a green corridor will greatly benefit the country in its struggle for climate protection.

Furthermore, trees will be planted along the CPEC route because the people’s health should not be compromised by rapid industrialization and should not be polluting the environment by producing emissions.

In addition to this, the leadership of both Pakistan and China has a vision of making the CPEC a sustainable future for this whole region by making it a green corridor.

Both sides believe that CPEC has already given an economic boost and industrial support to the country and is also setting the foundation of a greener Pakistan by providing green jobs and clean energy which is having a positive impact on the health of hundreds of thousands of Pakistanis.

China is striving to peak carbon dioxide emissions by 2030 and achieve carbon neutrality by 2060. So far, more than 30 countries and regions around the world have committed to the goal of carbon neutrality.

As the CPEC enters its second phase, Pakistan’s infrastructure policy makers have renewed their commitment to environmental and social sustainability, making for a greener CPEC.

Pakistan has pledged to move towards renewable energy, particularly solar, wind and hydro, and away from coal power.

Alongside this, the government has launched large-scale afforestation initiatives as well as sustainable waste management and conservation programs.

Special Economic Zones (SEZs) are free-trade areas of productivity in a country, where the commercial laws are relaxed to attract more and more inflows of FDIs such as allowing certain tax exemptions.

SEZs, which represent an integral component of CPEC’s Phase-II, provide a significant opportunity for employment generation and business growth in Pakistan. The vast network of SEZs should be used for rigorous plantation and green development.

Unfortunately, the Global Climate Risk Index (GCRI) has rated Pakistan as the world’s fifth most vulnerable country to climate change in 2020 which urgently needs a diversified but integrated mechanism to reduce high ratios of climate change..

Climate change has become one of the most dangerous non-traditional securities around the globe and Pakistan is not an exception.

Abrupt melting of glaciers, invasion of locusts, massive forestation, degradation of soil and last but not the least constant severe spells of harsh weathers have already substantially reduced agro productivity in the country.

Moreover, imbalanced national energy generation mix is also a worrisome issue which should be resolved through the ongoing energy projects of CPEC. More meaningful small, medium and large hydro-dams should be included in CPEC Phase-II. Projects of wind, solar and biomass should also be considered in its phase-II.

Chinese artificial intelligence techniques and technologies should be implemented to transform larger deserts into green fields for achieving the targets of climate change 2030. China has already transformed its deserts into greenery which should also be replicated in Pakistan under the flagship of CPEC Phase-II.

There is an urgent need to revolutionize the country’s agriculture sector especially in CPEC Phase-II by pursuing Chinese innovating crops techniques, hybrid seeds, modern machineries, drone technologies, tunnels cultivation, green technologies and above all multi-cropping should be pursued in CPEC Phase-II.

To conclude, Climate Change is a reality and CPEC is a futuristic project to reduce the ratios of the same which should be implemented as soon as possible.