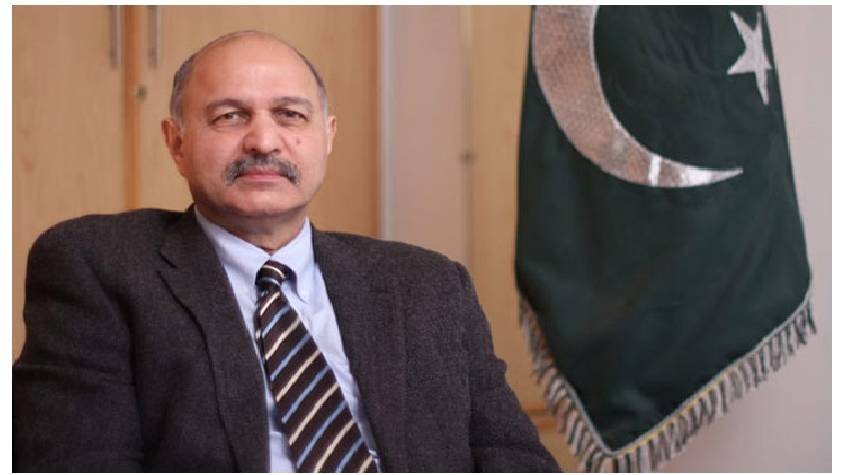 In an interview with Anadolu Agency (Turkish state-run news agency), Senator Mushahid Hussain Sayed, Chairman of the Senate Standing Committee on Defence said that Pakistan has become the hub of regional connectivity due to the BRI’s flagship project, China-Pakistan Economic Corridor (CPEC). He also said that CPEC and its Gwadar port will play a major role in the country’s pursuit of its goal, especially at the time when it started enhancing trade ties with landlocked Afghanistan and the Central Asian countries.

The policies of “Muslim middle powers” can no longer be dictated by Western nations, while these nations should focus on connectivity, boosting their economies, and coming together for “mutual interests,” a senator said.

Calling Turkish President Recep Tayyip Erdogan a “lion of Asia” who has a “vision and will,” Mushahid Hussain Sayed told Anadolu Agency: “We have what I call ‘Muslim middle powers’ emerging like Pakistan, Turkey, Iran, and Saudi Arabia […] and these are important elements who are playing a role for stability.”

“Their policies can no longer be dictated by people sitting in London, Washington or New York or Brussels,” said Sayed, who was visiting Istanbul for a meeting on Palestine with lawmakers from several other countries.

Citing the “role” of Turkey and Pakistan in Azerbaijan’s second Nagorno-Karabakh war which started in September 2020 and lasted 44 days to recapture its territory from Armenia, Sayed called for greater cooperation on regional connectivity, the economy, defense, and issues of the Turkish Republic of Northern Cyprus (TRNC), Palestine, and occupied Kashmir.

Turkey-Pakistan relations not dependent on govts

“It predates the existence of even Pakistan,” he noted.

Recalling the help extended by South Asian Muslims during Turkey’s war of liberation, he said: “This relationship, irrespective of any government in Turkey or in Pakistan, is always a strong bond.”

Sayed said the two countries “have similar positions on the issue of Palestine, Kashmir, and the TRNC.”

“This relationship has been reinforced by our cooperation in the fields of economy, defense, diplomacy, and in the field of regional connectivity, and that is extremely important,” he said, citing the resumption of the Istanbul-Tehran-Islamabad (ITI) freight train as one example.

“When Azerbaijan was fighting the Armenian aggression and occupation of the homeland, Pakistan and Turkey were two countries which rose to the occasion,” he said, adding “because of this move,” the flags of Turkey and Pakistan were raised in Azerbaijan when they celebrated the Nagorno-Karabakh victory.

Sayed said Pakistan was the first country to send a delegation of MPs to “express solidarity” with Turkey after the failed coup by the Fetullah organisation in July 2016.

“I, myself, in my speech at the Asian Parliamentary Assembly in Cambodia, said that President Erdogan is ‘the lion of Asia’,” he recalled. “I meant it because he is a man who has vision, like (former Malaysia prime minister) Dr. Mahathir Mohamad.”

Sayed said Erdogan is “a man who takes positions on issues, and he has shown the vision and will to do that.”

Acknowledging that progress in bilateral relations between Turkey and Pakistan faced “bureaucratic obstacles,” Sayed, however, said: “there are no limits to Pakistan-Turkey collaboration.”

He said the two countries should sign a free trade agreement “and we should cut through the bureaucratic red tape.”

“It’s not a decision for bureaucrats. It is a political decision,” he asserted.

“And there is the issue of dual nationality, which should also be there,” he said. “I will work on these issues.”

Sayed said Istanbul and Turkey are “the favoured destinations of Pakistanis when they go abroad because of love, esteem, and respect.”

“We will be there with our Turkish brethren to celebrate the historic anniversary because Quaid-e-Azam Muhammad Ali Jinnah had said that when Mustafa Kemal Ataturk died in October 1938, this is a day of mourning for the Musalmans (Muslims) of India,” said Sayed, a renowned political commentator.

‘Element of racism in Ukraine war’

Commenting on Russia’s war on Ukraine, the senator said Pakistan and Turkey “have broadly similar positions on the issue of the Ukraine war.”

“Of course, nobody can endorse any invasion of any foreign country. But there’s a context to that. And Pakistan, therefore, abstained on that issue because basically, we see it as a European war,” said Sayed.

“We are also concerned! I, as a Pakistani, and as a person who has links with the media, believe that there are, unfortunately, a lot of double standards in the Western media’s coverage of the Ukraine war, because there is an element of racism — as if the lives of Europeans in Ukraine are perhaps more precious than the lives of non-Europeans, be they Kashmiris or Palestinians or Afghans or Syrians or Iraqis,” he said. “That needs to be put on the record.”

Sayed said there is the “context of the NATO expansion” around the Ukraine war.

“We wish that it should not become a part of another new Cold War,” he said.

Complimenting Turkey for its role in attempting to diffuse the situation, Sayed said “Turkish drones are playing a very important role.”

“The Bayraktar drone has been very effective. It has been used on almost 80 occasions in the Ukraine war, and this drone was also effective in the Azerbaijan war,” he said.

“It is a tribute to Turkish technology that it is so sophisticated. And we as Pakistanis, who are brothers and friends of Turkey, take pride in the achievements of this country.”

Sayed said President Erdogan is “among those leaders… Perhaps the only international statesman who has the capacity…who has the vision, and who has the will to bring both parties (Russia and Ukraine) to the conference table.”

He warned that “prolonging the war is part of a new Cold War.”

“We do not agree with that view because prolonging the war would create other complications like shortages of oil and food. And it is in that context, it is important that President Erdogan play that role. He has already done it at the level of foreign ministers,” Sayed said, referring to a meeting of the foreign ministers of Russia and Ukraine on the eve of the Antalya Diplomacy Forum in March.

“I hope that if there is a summit between (Ukrainian) President (Volodymyr) Zelenskyy and (Russian) President (Vladimir) Putin that it will be President Erdogan who will host it, Insha Allah!”

‘Resurgence of the East’

Lauding the vision of philosopher and Pakistan’s national poet Sir Muhammad Iqbal, Sayed said: “This great Muslim philosopher saw it 90 years ago that the sun is rising in the east.”

“I think he was referring to the resurgence of Asia and the emergence of the Asian century,” he said.

Pointing to President Erdogan’s slogan “the world is bigger than five,” Sayed said: “What we are seeing today in the world, and what President Erdogan alluded to, is that it has become a multipolar world where — and this is very important — the balance of economic and political power is shifting from the West to the East. And by the West, I mean the United States of America and Europe.”

He said there were “multiple power centres now […] no one superpower, self-styled, can control what is happening today.”

“In that context,” Sayed emphasized, “I feel that the world has to adjust to new powers, especially in the Muslim world.”

He quoted a remark by Pakistan’s founder, Muhammad Ali Jinnah, during an interview with an American magazine in October 1947, in which Jinnah said: “Pakistan will be the pivot of the world placed on the frontier around which the future geopolitics of the world will revolve.”

In 1964, said Sayed, “Pakistan, Turkey, and Iran launched the first initiative in the Muslim world for regional connectivity — the RCD.”

Later on, the RCD evolved into the ECO with the participation of the Central Asian republics, Azerbaijan, and Afghanistan.

The over $50 billion CPEC is the flagship project of China’s multi-billion-dollar Belt and Road Initiative (BRI).

“The train, which leaves London, reaches Beijing in 10 to 12 days. And Turkey is the centre,” he said.

He said thanks to these initiatives, a “greater South Asia” was emerging which “was not a geographical concept that is just a South Asia.”

“It’s a geopolitical concept,” he noted. “This regional connectivity is driven by the economy, energy, roads, railways, ports, and pipelines.”

“A whole new world is opening. And we are at the centre of that. So Pakistan and Turkey, together with countries like China and Iran as well as Central Asia, have to play a historical role,” said Sayed. “This is the need of the hour.”

“One is a vision of a new Cold War, conflict, confrontation,” he said, adding this phenomenon was already “happening in Europe, where they see Russia as the enemy.”

“The hawks in Washington talk of China as the enemy… We reject this kind of thing,” he emphasized, arguing that “after so many years of conflict, we cannot have a return to a Cold War…a zero-sum game mindset.”

Lauding what he called the “historic visit” of Chinese Foreign Minister Wang Yi to Islamabad, where he attended the Organization of Islamic Cooperation (OIC) Foreign Ministers Summit in March this year, Sayed said: “I do recall that President Xi Jinping hosted a conference on the dialogue among civilizations in 2019.”

Wang was the first Chinese top diplomat to represent his country at the OIC at this level.

“So there is a lot which is linking the Chinese civilization with the Islamic civilization,” he said.

Sayed said Xi had also presented “for the first time a peace plan for the Middle East on the issue of Palestine.”

He said China was the “first country to support” the war of liberation by Palestinians on the first of January 1965 while Pakistan was the first country which hosted the Palestine Liberation Organization (PLO) under Yasser Arafat in April 1974 in Lahore at the Islamic Summit, where the PLO was accepted and recognized as the sole legitimate representative of the people of Palestine.

“In that context,” he said, “there are a lot of commonalities between the positions of Pakistan, Turkey, and China viz-a-viz Palestine.”

“This needs to be taken forward. This initiative of inviting Chinese Foreign Minister Mr. Wang Yi to Pakistan was very important. And that has reinforced this relationship and together with the BRI, together with the $400 billion China-Iran agreement,” he said, calling it “extremely important.”

Referring to the Beijing Olympics held this February, Sayed said China-Saudi relations and China-UAE relations also add to this phenomenon.

“Pakistan, Egypt, the UAE, Saudi Arabia, Qatar, other countries. And Turkey was also represented there.”

“This camaraderie is developing. And interestingly, when Mr. (Samuel P.) Huntington talked in a negative way about the clash of civilizations in 1993, it seems that the Confucian civilization and Islamic civilization are moving closer together, not against anybody, but for the common good. For connectivity, for cooperation, for strengthening development in these countries,” he said.

‘Kashmir and Palestine are inextricably intertwined’

Sayed said the issues of Kashmir and Palestine “are inextricably intertwined.”

“They are both linked with peace, security, and stability in South Asia and the Middle East, respectively,” he added.

“Both (of) our lands are under brutal foreign occupation,” he said, referring to UN Security Council resolutions that grant the peoples of these lands the right of self-determination.

He said Palestinians and Kashmiris were facing “human rights sufferings” while the “demographic balance is sought to be changed by Israel in Palestine and by India in occupied Kashmir.”

“There is a genuine, popular, indigenous, spontaneous resistance to this repression.”