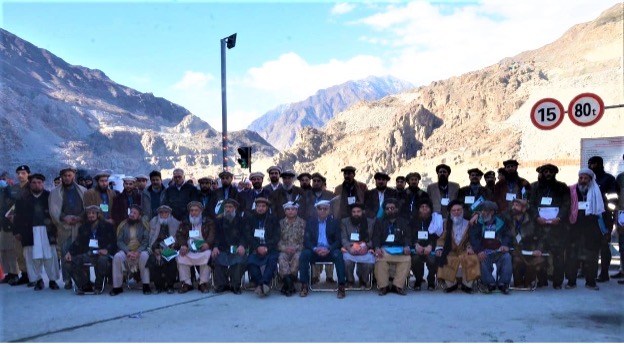 The historic announcement was made by the 26-member Thor-Herban Grand Jirga, mandated for settlement of the dispute, in a ceremony held at the Diamer Basha Dam Project site.

Prime Minister Imran Khan expressed his “pleasure” at the settlement in a post on his Twitter, saying the development will ensure the “smooth and timely” completion of the Diamer Basha Dam project.

The Thor-Herban Grand Jirga was constituted in 2019 to resolve the boundary dispute between the two tribes. The Jirga had a series of detailed deliberations during the last two years, which was facilitated by WAPDA and civil administrations of GB and KP.

As per the decision of the grand jirga, cheques worth Rs. 400 million were presented to the affectees of the 2014 clash between the two tribes claiming lives and properties.

In 2020, WAPDA awarded a contract valued at around Rs. 442 billion (US$ 5.8 billion) to a joint venture of Power China-FWO for the construction of the diversion system, main dam, and access bridge for the 4500MW Diamer Bahasa dam, as well as the 21MW Tangir hydropower project.

The Diamer Basha Dam Project is being constructed on River Indus, which is scheduled to be completed in 2028-29. The Project will have a gross water storage capacity of 8.1 MAF to irrigate 1.23 million acres of additional land. With an installed power generation capacity of 4,500 MW, the project will provide more than 18 billion units per annum to the National Grid.