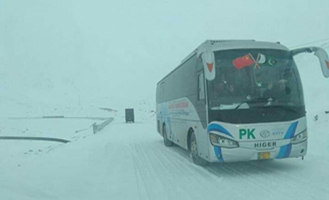 Provincial Minister for Transport, Shah Muhammad said that 62 new buses for BRT had arrived Port Qasim Karachi from China and remaining 24 would be delivered soon.

In an official announcement, the minister informed that now total number of buses in BRT system would reach 220.

Earlier in the day, Chief Minister Mamoud Khan also directed the quarters concerned for necessary steps to make all the feed routes of BRT functional at the earliest.

He directed that relevant entities would have to fulfill their respective responsibilities well in time for this purpose.

The Chief Minister maintained said that the provincial government was making all out efforts to facilitate the citizens, adding that BRT service would be extended to remaining areas of Peshawar in order to connect them with the city.

He underlined that extension of BRT to more areas was necessary to reduce the environmental pollution in the city and the provincial government required financial resources for the purpose.

The Khyber Pakhtunkhwa government has announced six new feeder routes and 86 buses for the BRT service with an estimated cost of Rs 1 (one) billion.