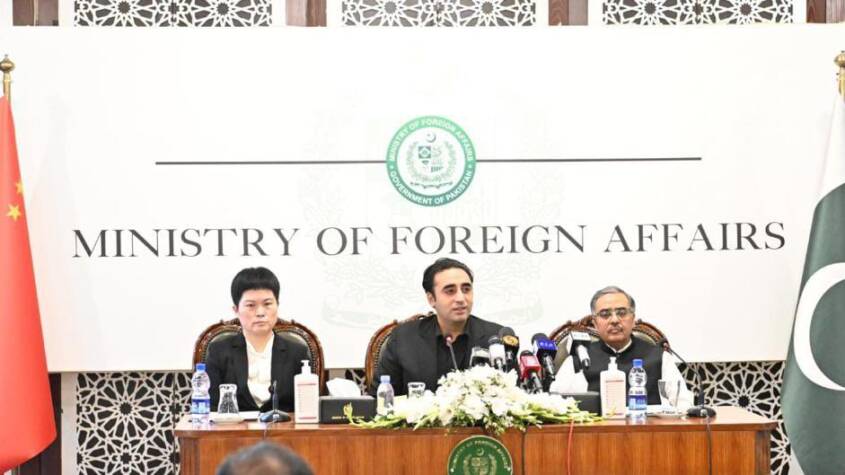 Foreign Minister Bilawal Bhutto Zardari stated that the government would guarantee that the perpetrators of the Karachi University suicide attack, which killed three Chinese teachers last month, give “exemplary punishment.” At a condolence reference for the terrorist attack victims conducted at the Foreign Office, the foreign minister condemned the terrorist assault. FM Bilawal further stated that Pakistan condemns this barbaric crime and that the adversaries of the Pakistan-China all-weather strategic alliance will never be forgiven. He also stated that no one will be able to ruin our unbreakable bond. Bilawal promised that authorities will do all possible to safeguard the security and safety of Chinese citizens in Pakistan.

Foreign Minister Bilawal Bhutto-Zardari vowed on Saturday that the government would not rest till it had given “exemplary punishment” to the perpetrators of the suicide attack inside Karachi University last month, in which four people, including three Chinese nationals were killed.

Addressing a condolence reference in Islamabad, he said the country was shocked and saddened at the terrible loss.

“We fully condemn this cowardly act and we will never forgive the enemies of Pakistan-China all-weather strategic partnership. We will also not allow anyone to harm our iron-clad friendship. The sacrifice of both Chinese and Pakistanis in nurturing our bonds of brotherhood will not be in vain.”

Bilawal pledged that authorities would do everything in their capacity to provide maximum security and ensure the safety of the Chinese in Pakistan. “You are our guests and we are determined to ensure your safety and comfort in our country.

“To the families of those who perished, our entire nation grieves with you. While we cannot bring back the departed, we will not rest until we have given exemplary punishment to the perpetrators of this heinous act,” he vowed.

The foreign minister said that Pakistan-China ties were time-tested and the countries would face every challenge together and emerge stronger.

The suicide attack at Karachi University had been carried out using the rights of the Baloch as an “excuse”, he said.

“I know that every Pakistani is proud of our hospitality and gives importance to caring for friends. Not only do we know this [but] we’re also known for this internationally. Neither a Sindhi Pakistani nor a Baloch Pakistani can ever tolerate the terrorism that is directed at our guests.”

In the last decade, Pakistanis saw that citizens were targeted using religion, he said, iterating that Baloch rights were used as an “excuse” for carrying out the terror attack at the university.

“These people left their homes to come here and educate our people. This attack happened not only on those individuals but on Pakistan-China friendship as well. Now, it is the responsibility of every Pakistani to proceed on this issue as if it was an attack on our own brothers and sisters.

“Together, we have to ensure that we do not tolerate such terror attacks. We will ensure that the families of these people and our public get justice.”

The country would succeed in its fight against terrorism and show the world that those who believed that they could attack Pakistan-China friendship would not succeed, he pledged.

On April 26, a woman, later identified as Shari Baloch, detonated herself as a van carrying staff members was about to enter the Confucius Institute at the Karachi University.

A spokesperson for the university had identified three of the deceased as Chinese nationals — Confucius Institute Director Huang Guiping, Ding Mupeng and Chen Sai. The fourth victim was the van’s driver, Khalid.

Another four people were injured in the attack.

The Karachi University attack was the third terrorist attack on Chinese citizens on Pakistani soil in a year.

President Dr Arif Alvi and Prime Minister Shehbaz Sharif had separately visited the Chinese embassy later and assured officials that Pakistan would leave “no stone unturned” to ensure the safety of Chinese nationals and bring the elements involved in the incident to justice.