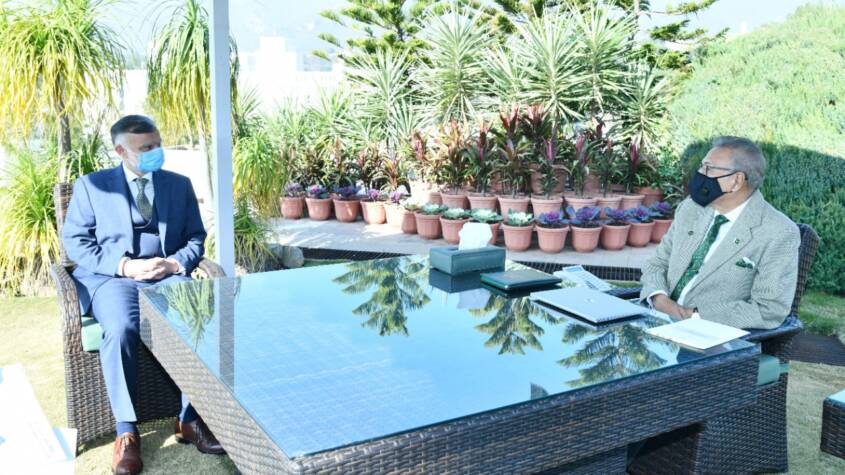 During a meeting with Pakistan’s Ambassador to the Republic of Korea Nabeel Munir, President Arif Alvi stressed to enhance relations with the Republic of Korea in diverse fields with a particular focus on trade and economic cooperation for mutual benefit. He advised the envoy to urge the Korean investors to invest in different sectors of the Pakistani economy, particularly in the Special Economic Zones (SEZs) under CPEC projects.

President Dr Arif Alvi on Thursday stressed for enhanced relations with the Republic of Korea and Algeria in diverse fields with particular focus on trade and economic cooperation for mutual benefit.

During his meeting with Ambassador-designate Nabeel Munir, the President said that Pakistan highly valued its relationship with the Republic of Korea and wanted to further enhance collaborations for promoting political, economic, people-to-people, and cultural relations.

President also emphasized the need for proactive measures to increase the quantum of trade between the two countries.

The President highlighted that Pakistan was a key investment destination for foreign investors in view of its investor-friendly policies and improved busi-ness environment.

He asked the Ambassador to urge the Korean inves-tors to invest in different sectors of Pakistani econ-omy, particularly in the Special Economic Zones (SEZs) and China Pakistan Economic Corridor (CPEC) projects.

The President said that both countries had great scope for promoting religious tourism as Pakistan possessed a number of historic Buddhist religious sites and religious tourists from Korea needed to be encouraged to visit the country.

He appreciated the assistance and cooperation ex-tended by the EXIM Bank of South Korea for initi-ating work on the construction and establishment of Information Technology Park, at the cost of USD 88.80 million in Islamabad.

He welcomed the recent launch of the Samsung Mobile Phones Manufacturing Unit in Pakistan, being established in Karachi.

The President also underscored the need to encour-age the exchanges of Parliamentary Friendship Groups of the two countries to further boost bilat-eral cooperation.Later, during the separate meeting with Ambassa-dor-designate of Pakistan to Algeria, Dr Muhammad Tariq, the President said that Pakistan and Algeria enjoyed cordial relations based on a common relig-ion and cultural values.President for enhanced trade, economic cooperation with South Korea, Algeria

He stated that Pakistan had a vibrant IT sector and underscored the need for increasing collaboration between the two countries in the field of IT.The President asked the ambassador to work for further promoting bilateral relations by arranging the exchange of Parliamentary and Chamber of Commerce delegations between the two countries.He also proposed to set up a Joint Business Council to improve bilateral t ade between Pakistan and Algeria.