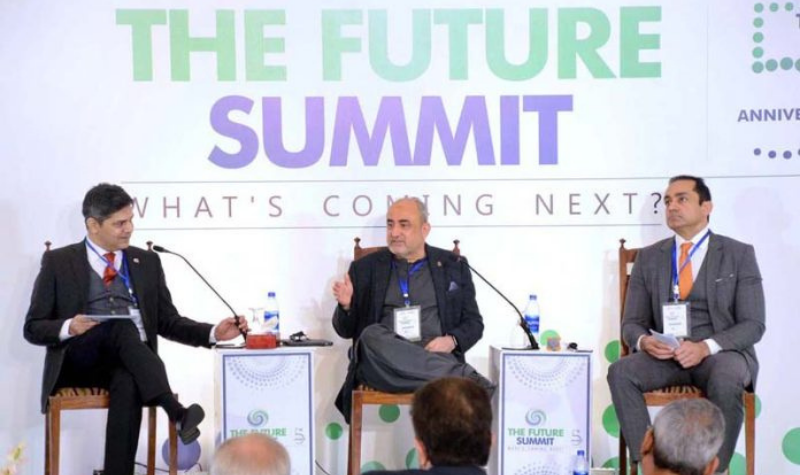 Addressing the second day of “The Future Summit,” organized by the Nutshell Group in collaboration with the Martin Dow Group, Special Assistant to the Prime Minister on CPEC affairs Khalid Mansoor said that $25 billion had already been invested in Pakistan under the CPEC, while energy projects under the CPEC have added 5,300 MW to the national grid and another 3,500 MW would also be available soon. He condemned US propaganda CPEC as a debt trap for Pakistan and highlighted Pakistan received loans at an average cost of less than two percent for big projects, which is either lower or at par with what Pakistan receives from Europe, America, or the World Bank.

Speaking at a conference of business leaders, the special assistant to the prime minister on CPEC affairs said two to three investors have approached him for the possible relocation of their manufacturing units to Pakistan. “[They said] create a vocational and training institute [as] we’re going to need 100,000 talent of Pakistan in the next one year,” he said.

Replying to a question about China refusing to invest in coal-based projects, Mr Mansoor said the policy directive from Beijing doesn’t apply to pre-approved energy projects.

He said the country is looking for “scalability” in indigenous coal production, which will not only reduce the per-tonne price of the fuel but also bring down the cost of power.

Sindh Engro Coal Mining Company Ltd has been mining 3.8 million tonnes of coal every year since 2019. It currently sells its entire output to Engro Powergen Thar Ltd, the country’s only coal-based 660MW power plant that burns the indigenous fuel.

The mining company is set to double its output to 7.6m tonnes per annum by June this year. The expansion will coincide with the commissioning of two 330MW power plants by Thar Energy Ltd and ThalNova Power Thar Ltd. The third phase of the mine expansion will take the output to 12.2m tonnes of coal per annum by June 2023. The increased output will meet the fuel demand of a 660MW power plant that the Lucky Group is building at Port Qasim.

“I’ve been one of the biggest proponents of Thar coal,” said Mr Mansoor who played a key role in envisioning the coal-based power plants when he served as CEO of The Hub Power Company Ltd.

The next step towards scalability is the gasification and liquefaction of Thar coal, he said. “We’re importing close to 18m tonnes of coal per annum for cement and brick kilns. [We need] some kind of blending to achieve scalability,” he said, adding that Thar coal will now be transported to fertiliser plants where they will gasify it for making fertiliser.

Dismissing the view that the pace of progress under CPEC has slowed down, Mr Mansoor said projects worth $28 billion are being developed in its second phase, which follows the implementation of $25bn projects during the first phase.

“Close to 4,000-plus megawatts of renewable energy projects are getting implemented. A majority of these projects are at very, very attractive loans by China,” he said, noting that the average cost of Chinese funds for all CPEC-related projects is less than two per cent per year.

He reiterated that local, Chinese and other international investors receive equal benefits for setting up businesses in Special Economic Zones (SEZs). However, Mr Mansoor criticised local investors for their tendency to acquire land in SEZs and then postpone the establishment of an actual business unit on it. “It’s not correct if you just take the land [and] restrict other investors,” he said.

In response to a question about taxpaying businesses turning into non-taxpaying ones because of wholesale fiscal incentives for setting up projects within SEZs, Mr Mansoor said governments incentivise businesses through tax breaks and easy access to utilities all over the world.